The Mexican Council on Foreign Affairs (COMEXI) presents the webinar "Mexico-Australia Trade Relations". This webinar took place on October 7th, 2020 and belongs to the "Quarantine Webinars" series. This webinar features the participation of Amb. Remo Moretta, Australian Ambassador to Mexico, Central America, Cuba and Dominican Republic. The conversation was moderated by Cristina Hernández Strategic Associate at SAI Derecho y Economía, and is also a COMEXI Associate.

The webinar begins with the introduction by Luis Rubio who pointed that Australia and Mexico could hardly be further apart in geographic terms and yet they have long shared similar objectives in economic and trade policies. He welcomes and thanks Ambassador Moretta and introduces the PhD. Maria Cristina Hernández, moderator for this webinar.

The moderator states two points, first, that despite the geographical distance between the two nations, bilateral relations are quite rich, mature and healthy, having still a large potential for being strengthened through cooperation in several areas and second that Australia is an important partner for Mexico therefore the importance of this event. The Amb. Moretta begins by expressing that the relationship between Mexico and Australia is much closer than people would imagine, especially because both countries are similar in size of the economy, and both also are part of international organizations such as the United Nations, the World Trade Organization and the OECD. In the last few years, the relationship has grown significantly between the two countries, especially on the trade front but not only, they have also grown economically, culturally and politically. When it comes to the economic relationship it has grown by virtue of two principal platforms, first Australia has become the seventh largest new source of foreign direct investment in the mexican economy and second, both countries now are members of the Comprehensive and Progressive Trans-Pacific Partnership Agreement (CPTPP). In regard to the political relationship, as Mexico heads into its term on the Security Council Australia is ready to work on a range of different positions which matter to the international rules based system such as the abolishment of the death penalty or advancing the rights of women. In terms of culture they share some similarities because they were colonies of former colonial powers and both have indigenous people so one of the priorities is to broaden and deepen Australia´s engagement at the political and cultural level.

The Ambassador analyzes that the trade relationship is very important to both economies, regarding this, he highlights that major exports from Australia to Mexico include fertilizers, non-electrical machinery, coal, meat, ores and concentrates however there is a trade deficit with Mexico mainly because the major exports from Mexico to Australia are passenger motor vehicles, telecommunication equipment and parts, alcoholic beverages medical instruments and computers. They have a complementarity in terms of the trade but there is scope for that to grow especially under the CPTPP. Australian investors are looking to invest in Mexico across a range of different sectors like energy, mining, professional services and even in education. Certainly, there are areas of complementarity between the two economies so the totality of the relationship is broadening and becoming more complex not only bilaterally but at every level.

For Cristina Hernández it is clear that Mexico and Australia maintain mutually beneficial relations, that both countries hold a fluid political dialogue at every level also both countries share common visions on global challenges that is why they are partners and are cooperating in forums as OECD, APEC, G20 and the WTO. They have developed increasingly cultural and people to people relations and a growing bilateral investment relation for which Mexico is the biggest trade partner of Australia in Latin America. Focusing on the economic and trade arena, the potential is enormous but the reality is quite limited because for Mexico, Australia is the partner number 21 in terms of exports with 0.22% of Mexico’s total exports going to Australia, in terms of imports it is the trade partner number 50 with only 0.08% of total Mexico’s imports coming from Australia which makes it Mexico’s and it trade partner number 36. Accordingly, she poses a question for the Amb. Moretta in terms of the areas with the biggest potential for trade and which are the key opportunities for australian traders and investors in Mexico and vice versa. The Ambassador tackles the question saying that the bilateral trade relationship is quite modest and it has potential to grow however before the CPTPP a bilateral free trade agreement between Australia and Mexico did not exist. Now thanks to this Agreement it is possible to link the countries not only bilateral but also regionally by virtue of the integrated nature of regional trade. There is a great importance in integration of the international supply chain because this is the only thing that really has kept trade going at a time where there has been increased protectionist measures from certain countries.

Cristina Hernández agrees that the CPTPP gives the platform because it is the first trade agreement between Australia and Mexico and it is not only about trade but it is comprehensive and includes investors chapters and dispute settlements mechanisms. She also agrees that protectionism has been intensified by the pandemic because there has been a rupture of the value chains around the world. Therefore, Amb. Moretta ensures that rules of origin are essential because they are liberalizing trade. Moreover, the CPTPP is liberalizing not just because of the rules of origin and how they work on a cumulative basis but also because it seeks to remove “red tape” as you only need one export certificate of origin that can be self-certified and it will be valid in all eleven economies. These are the measures that will strengthen the international supply chains between the partners of the CPTPP.

To follow on the same line, Cristina Hernández highlights that when the United States withdraw from the TPP, the Pacific Alliance was seen as a pathway to realize the benefits of this agreement so under the figure of Associated State, Australia, Canada, New Zealand, and Singapore launched negotiations to explore options to put TPP into effect which in the end was successful. In this regard, she asks if it is not redundant to pursue another agreement with the Pacific Alliance particularly considering that Australia has concluded quite ambitious bilateral agreements with Peru and Chile. The Ambassador answers that the question of whether or not the Pacific Alliance is redundant because of the CPTPP depends  on the quality of the outcome of the negotiations under the PA and the level of ambition that can be reached. In the end, it would not be viable for Australia to accept a lesser agreement than the CPTPP.

Ambassador Moretta points to the importance of the Asia-Pacific Economic Cooperation Organization (APEC) for both Mexico and Australia. APEC brings China and various other countries that other regional forums do not also, unlike the WTO which is legally binding and has a dispute settlement system APEC has best endeavors because it is not legally binding and it enables countries to actually share best practices especially in the area of trade facilitation and costumes. Thereby, APEC is a really important element to not only the bilateral engagement but also the regional. As former representative of Mexico in the APEC, Cristina Hernández agrees that this platform has great importance for incubating ideas and initiatives.

For Cristina Hernández, Australia has a multilateral vocation which enables them to be an extremely proactive and constructive player, this is mainly a consequence of their geographical isolation that pushes them to connect and be part of the international platforms in order to be linked to the world and to the important regions. In contrast, the current administration in Mexico has declared that the best foreign policy is domestic policy, this raises questions about whether Mexico continues to be a key player in the multilateral arena. Ambassador Moretta states that Australia has not seen a withdrawal from Mexico on the international stage, instead they have maintained a very active posture in every forum from which both are part. The Ambassador comments that, in the past Australia’s foreign policy was dictated by the “tyranny of distance” because they are so far away from the rest of the world but today geographically distance does not equate to how they integrate globally, in this sense, digital economy and e-commerce takes on great importance particularly because it will enable Australia to grown their economy in a post-COVID environment.

In regard to investment, Australia has emerged as one of Mexico’s largest sources of foreign investment especially in infrastructure and in the energy sector. According to the Ministry of Economy, there are more than 260 companies with australian participation in Mexico which have materialized investments that amount to $5 billion dollars from January 2001 to June 2020. In this regard, a question arises related to the change of rules for investors and if this is affecting potential investors. The Ambassador answers that the mexican market is very attractive because of its size and its geostrategic location. At the end of the day, all investors look for transparency, predictability and stability in the market so as long as Mexico can provide these fundamental values, the relationship will maintain positive. Cristina Hernandez highlights that the CPTPP provides the investor dispute settlement mechanism as an important instrument in case of any violation of the rule established by the Agreement.

In order to continue the dialogue, Cristina Hernandez introduces questions posed by the participants of the webinar. Luis Rubio asks how Australia will end up leaning if the United States and China further deepen their current conflict. Ambassador Moretta points out that Australia’s link to China is very strong because it is their largest export destination; they also have a Free Trade Agreement which covers goods, services and investment, however they also have an Agreement with the United States. At the end, Australia is a multilateral country which encourages parties with differences to engage constructively both bilaterally and multilaterally to resolve their conflicts so it is not about choosing one against the other but working cooperatively for making sure that they have a rules-based system with norms that apply to everybody.

A second question arises about what it would mean for the CPTPP if the United Kingdom decided to join the Agreement. Australia has made clear that they are open to new members so at the end of the day it would depend on whether they can meet the requirements and the standards of the CPTPP. There is another question about the reform of the WTO to which the Ambassador answers that there is no need for a round in order to achieve the reforms because it can be managed within the structure of the Organization.

A final question is made about what incentives and mechanisms exist for the Mexican companies that want to enter the Australian market. Ambassador Moretta highlights that the attractiveness of the Australian market for Mexican investors and exporters is that they provide a platform that is transparent, predictable and well-regulated and they also provide a close proximity to Southeast Asia and North Asia. 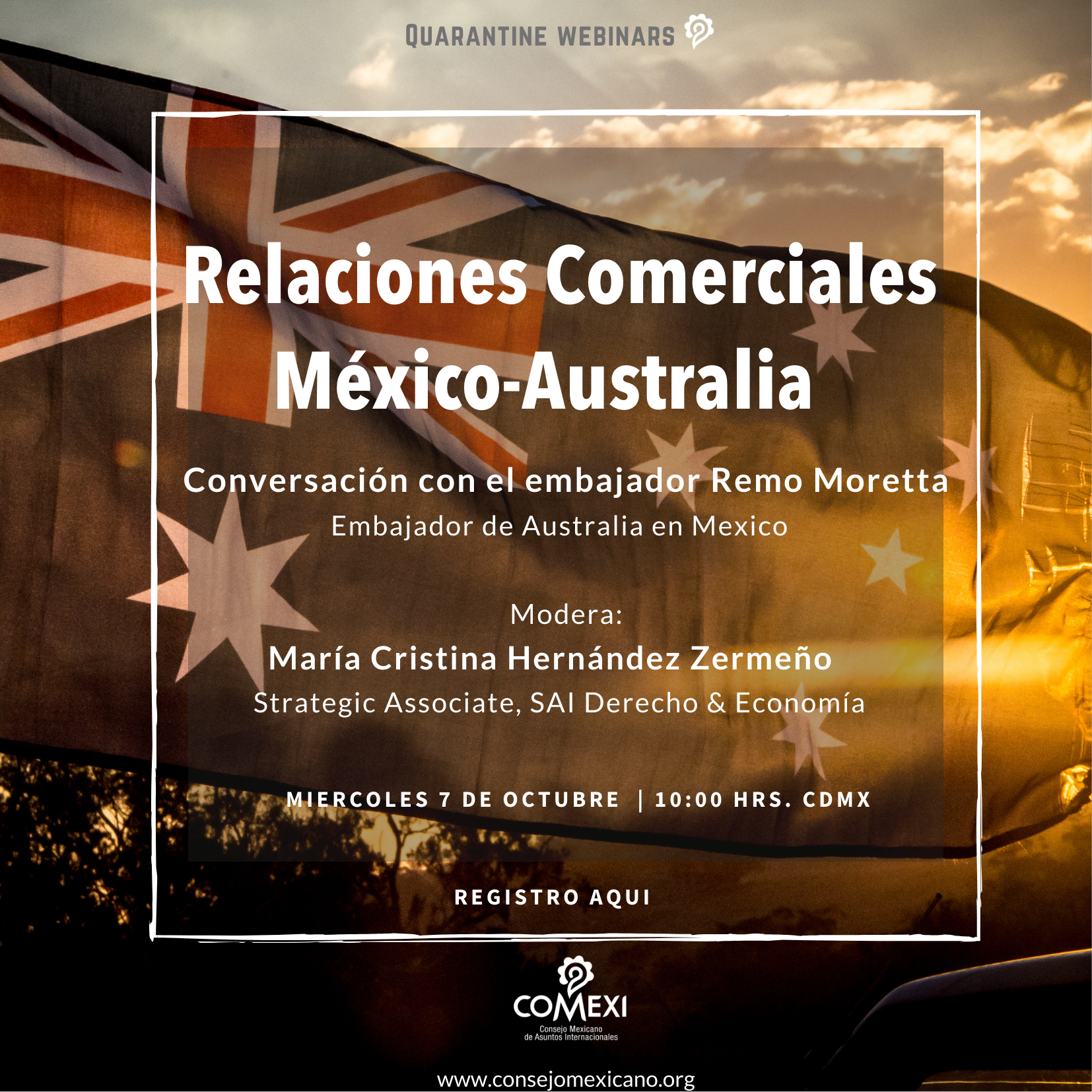 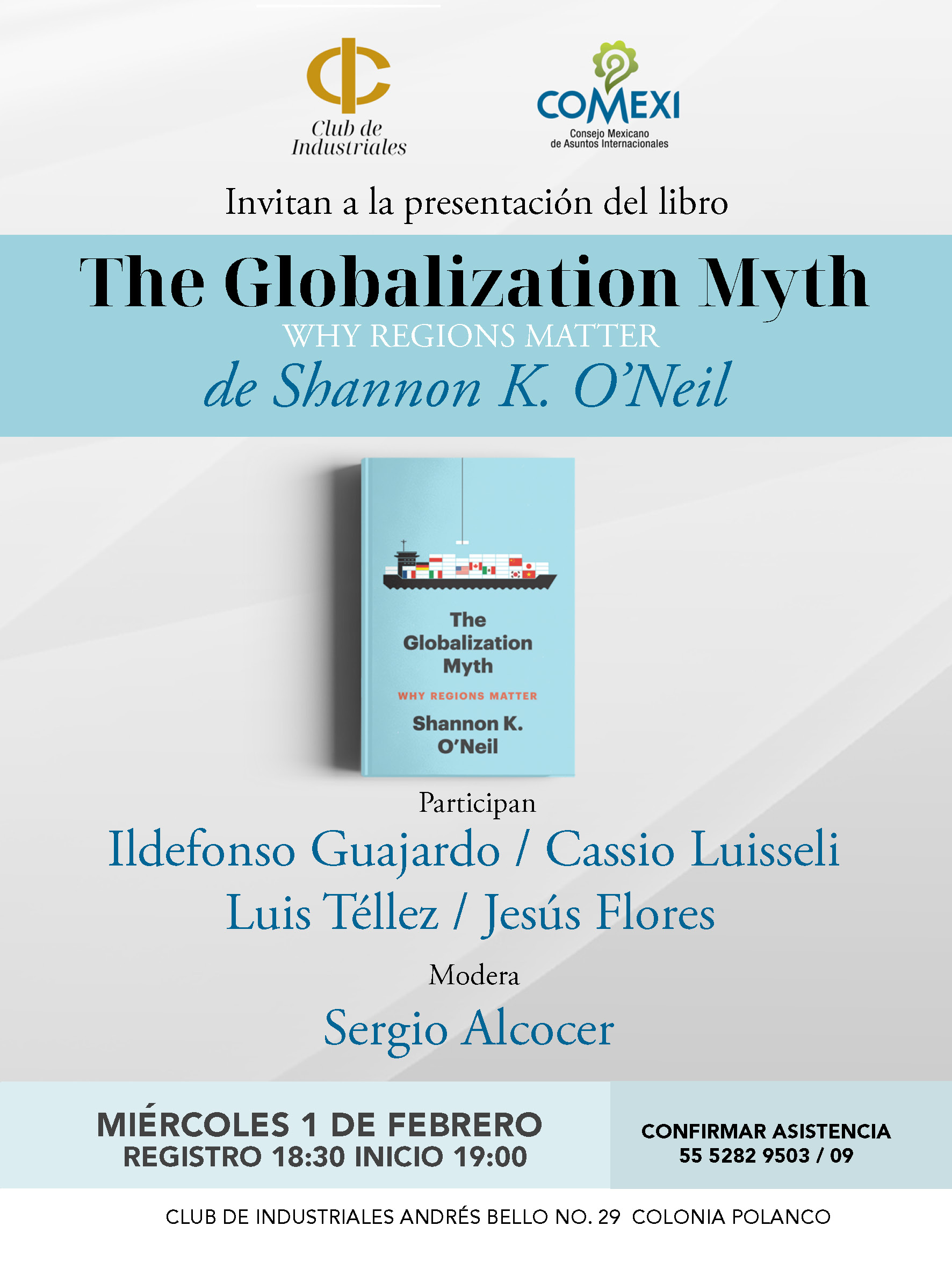